• The Complete Dramatic Score from the 1965 film set in Africa starring ROBERT MITCHUM, CARROLL BAKER and IAN BANNEN.
The latter-day Mister (Joe) Moses is a snake-oil pitchman who is chased out of an African village and is found, literally, in the bull-rushes by Julie Anderson, daughter of missionary Reverand Anderson who has learned that he is a diamond smuggler and threatens to expose him to her fiancé Robert; the district commissioner if he doesn’t help lead an African native tribe to their new homeland. With the aid of a pitchman’s accessories, including an ability to set fire to a bush, a friendly elephant and his carnival wagon, the schemer is forced to lead his newly found friends out of their settlement which is condemned to be flooded by a new dam

• Newly Recorded in Stunning and Dynamic Digital Sound
• Performed by the Acclaimed and Award-Winning 75-piece City of Prague Philharmonic Orchestra, Conducted by Nic Raine
• Produced by James Fitzpatrick for Prometheus Records
• New Score & Orchestration Reconstructed by Nic Raine …who was principal orchestrator to John Barry on numerous films and albums
• Informative Sleeve Notes by Frank K. DeWald
• A Score in the same style and colour as ZULU and BORN FREE with its use of symphonic orchestra and ethnic precussion

For over forty years, John Barry lent his distinctive musical voice and keen dramatic sensibility to the art of scoring motion pictures. This early example of his work, although modest in scope, bears witness to his giant talent. With cannily crafted materials and carefully chosen colours, he brings to Mister Moses – a film largely forgotten today – an unforgettable musical landscape with “form and shape” that lingers far beyond the film that inspired it. 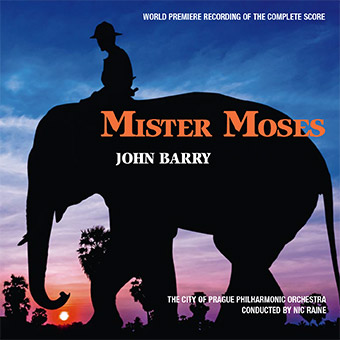