The Private Life of Sherlock Holmes

RELEASED ON APRIL 18th, 100 YEARS SINCE THE BIRTH OF MIKLOS ROZSA

“Father was extremely overjoyed at the prospect of scoring the life of Holmes. As he says in his autobiography, Double Life, the script had the wit, the imagination and the charm of Wilder’s best films, and I was certain that this was going to be the best of them all….as to the music, I enjoyed adapting my Concerto

This really was a wonderful opportunity for my father to join his two musical “lives” together. His score would have appeal to not only the aficionados of film music but to the more “sophisticated” concert goer. This World Première recording produced by James Fitzpatrick brings to life his beautiful, captivating and enchanting score and in addition gives us a wonderful bonus of listening to the music that father composed for the film that was cut out of the final version. This truly is a wonderful tribute to my father’s centennial! Thank you.“ 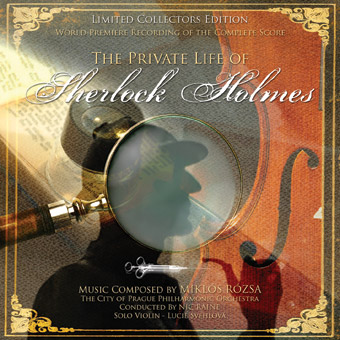